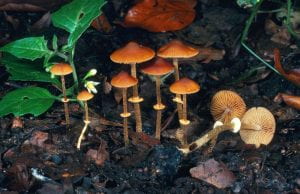 We didn’t get to do much because of testing but we eventually got to our activities. We played rounds of predator and prey on certain days. On the other days, we collected mushrooms and tried to capture the spores. We found a couple big mushrooms and a lot of small ones. We also found a log with blue mushrooms growing on it. When we finished collecting the mushrooms we stored them in the hoop house. Shane was planning on putting the surviving spores on white bread with us for an experiment. It turned out we didn’t have enough surviving spores though. That made it impossible to do the activity.

I was a little surprised at how you could collect the spores like how we did. I probably won’t be using what I learned about mushroom in my everyday life but I may use it sometime in the future. I found it slightly satisfying to find different kinds of mushrooms. I also found it satisfying to draw them. I think I participated well this time. It was something I enjoy doing with the drawing and finding the mushrooms so it was easy to concentrate. If I could do something differently I would’ve tried to be gentler with the mushrooms as to stop them from breaking. I also would have cut the mushroom closer to the ground to preserve most of the stem.

What kind of mushrooms were they?

Where did the mushrooms originate?

How old were the mushrooms?